If you’ve clicked on this article, chances are you belong in one of two camps.

First, let’s consider the origin of Gantt charts and why they’re still a go-to for project planning and management. 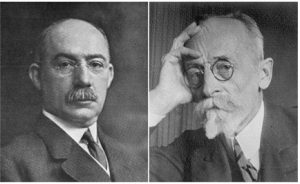 Gantt charts as we know them have been around since around 1910, when Mechanical Engineer Henry Gantt (that’s him in the pictures) developed them for ‘systematic, routine operations’ and to measure employee productivity.

Gantt charts are pretty much based on the ‘Waterfall’ approach to project management. Ironic really, since one of the first major projects to use them was the construction of the Hoover Dam.

In fact, that’s three good reasons to stop using them already, before we’ve even started the proper list:

So why are they still so commonplace? 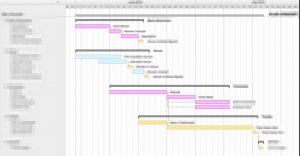 A typical Gantt chart (we’ve blurred the details, but things weren’t much clearer before to be honest)

It’s too easy to say people use them “because they always have”.

We know that’s not true.

Junior project managers are being taught how to use Gantt charts every day (whether they like it or not).

We think it’s more to do with box-ticking, and the false comfort that if everything’s listed out neatly in one place, then the project is more likely to go to plan. And as anyone who’s NOT a junior project manager knows, that’s never the reality. A few weeks – or even days – into the project, all you have is a ticked box, an out-of-date plan, and a headache.

Gantt fans, are you still with us?

1. Gantt charts don’t work the way our brains do

Think of a project initiation meeting. You have some of the best brains around the table. Everyone’s talking animatedly, throwing out ideas and taking turns to draw out the project plan on a whiteboard. Exciting, isn’t it? You end up with a mind map packed with great energy. Then someone takes it away, picks it apart and wedges it all into blocks of lines and columns. In a couple of hours, you’ve gone from fluid ideation to a tightly regimented plan that’s actually prohibitive to change.

2. And they kill creativity at every stage

It’s not just the way Gantt charts look that kicks the creativity out of things. When you follow a plan that’s built around dates and deadlines, there’s [literally] no space for new ideas. As projects evolve, the people delivering them deserve the chance to pipe up and say “Hey, I’ve thought of a better way to do that!”. But Gantt Chart Says No. No wonder team members lose interest and slip into a disengaged robot delivery mode. So you might meet the deadline, but have you ended up with the best possible solution? Probably not. And your teams will be miserable, too.

3. Ever tried to link your Gantt chart to your supplier? Or multiple suppliers? Don’t.

And yet, that’s how complex projects work. They are delivered by a linked ecosystem of multiple departments, clients, consultants, suppliers, subcontractors, each working off their own plans that have been built differently, in different tools, and almost impossible to link together. Even if you could, the resulting Gantt chart would be too huge to be useful.

4. Projects are complex, but Gantt charts are just bar charts

You know the people you rely on to actually complete the tasks – the ‘staffers’, ‘doers’ and team members? Well, most of them don’t understand your Gantt chart (if they even get to see it). That means that communications, updates and questions end up being duplicated in unnecessary email chains and endless status reporting and meetings.

6. The feeling of security you get from a Gantt chart is an illusion

The execution dates on a Gantt chart are likely to be different in reality. It’s common not to know all dependencies at the start of a project, time estimates might be based on unknowns, or the scope changes as you go. But Gantt charts work best when all dependencies are known and planned. Every time you change the scope or discover a gap in your plan you have to update the plan, which becomes messy and time consuming.

Project leaders can’t predict how technology might change, or the feedback they’ll receive from stakeholders. Things change. But the Gantt chart says, in rigid colourful bars: “We’re starting here, and we’ll do all of this in order until we reach there, OK?!”.  Think of the project as a road trip. Plan your route on a static road map, and you’ll have no idea what obstacles you’ll encounter along the way – or how to avoid them. An intelligent platform (yes, like Sharktower) is the SatNav of project planning, enabling you to re-route, respond and adapt as things change.

8. They’re not very agile either

Many teams are working in a blended environment, using aspects of both Waterfall and Agile project management. You could use a Gantt chart to show sprints, but to to track progress, you’d also have to add the tasks assigned to each sprint. And then delete any tasks which are subsequently removed from the sprint. Which is all manual and duplicates processes likely already being done in JIRA. Eurgh.

9. The critical path is simply the longest path to project completion, not necessarily the most critical tasks.

There are activities that could delay the entire project based on time estimates (providing the complex dependencies used to maintain the critical path are correct AND the estimates used to calculate the durations are accurate). But isn’t that true for any activity that’s difficult to complete, involves multiple resources and has any number of unknowns? We’re not just managing routine tasks and activities anymore. We’re managing risk, stories, decisions, outcomes, and value. Try putting those in a Gantt chart…

So what’s the alternative?

Sharktower’s Delivery Map planning tool is a living visualisation of the entire project throughout delivery. See tasks, decisions and user stories in one place.

This 4.5 minute demo shows how to create a project plan in Sharktower.

Love them or loathe them, Gantt charts can no longer handle the rapid, continual change most businesses are experiencing. If you’d like to know more about how Sharktower is taking planning to the next level, get in touch and we’ll arrange a time to talk.

Delivering the future: how to run, monitor and measure projects for better results.

How to evaluate, prioritise and approve projects in one place.